He plays with dolls?

Back when “dolls” and “action figures” meant the same thing — like, fifty years ago — 1:6 was the standard figure scale, established with the popularity of product lines like Barbie and G.I.Joe, and quickly became the industry standard. These figures usually had rubbery plastic bodies, cloth accessories, and sometimes real hair, nothing like the all-plastic action figures that have been around since Star Wars toys popularized smaller-scale products. Since the 1990s, 1:6 scale figures with removable clothing (often referred to as “playscale” or “twelve-inch figures”) have become collectible among adults, and are often high-end products aimed at the collector’s market, with retail prices well over a hundred dollars. For someone like me, who grew up on 1:18 scale Star Wars figures, these dolls don’t hold a lot of interest for me. Therefore, I only have a few figures at this scale, and they’re all on display in this glass showcase on my living room floor. 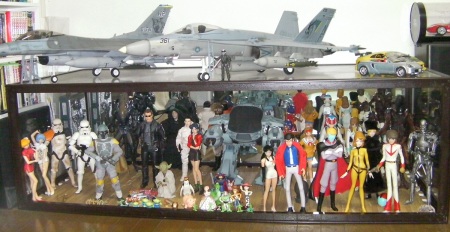 Most of these are Japanese vinyl figures, made of soft, cheap plastic and relatively cheap, and they have little-to-no articulation to speak of. The three up front are Leiji Matsumoto characters from 1974’s Space Battleship Yamato. (Nadia from The Secret of Blue Water is also visible in the background.) 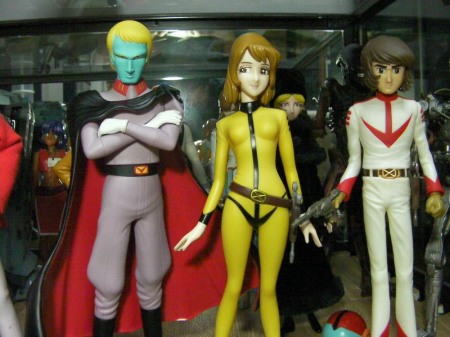 Behind them is Maetel, from Galaxy Express 999 (also a Leiji Matsumoto character), and two principal characters from Super Dimensional Fortress Macross. 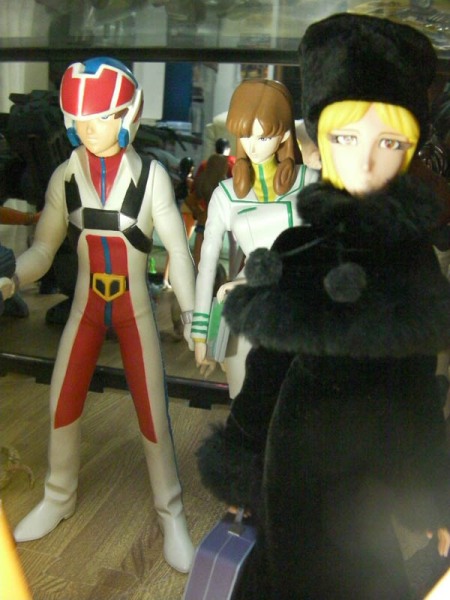 Note the accuracy of Maetel’s eyelashes, that extend well beyond the edge of her face!

To their left is one of the aforementioned high-end figures, the Aoshima endoskeleton from The Terminator, with a soft-vinyl Alien (based on the Alien: Resurrection design) in the background:

In the center is another expensive figure, the Hot Toys ED-209 from RoboCop. He’s flanked by Lupin III and Ginrei (of Giant Robo fame) on his left, and Misato Kisaragi and Pen-Pen from Evangelion on his right. 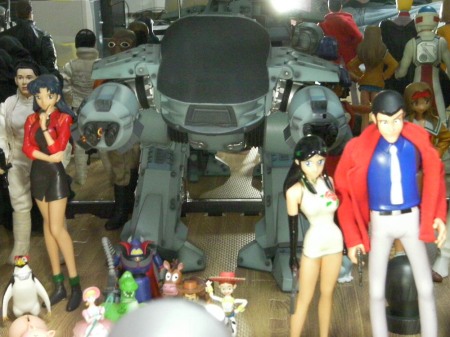 In front of ED are a collection of characters from PIXAR’s Toy Story. These are all from the “Disney Magical Collection,” a line of Japanese-exclusive figures produced by TOMY, and included in this display because they’re more-or-less 1:6 scale reproductions of the actual toys produced for (and depicted in) the Toy Story films.

I especially like the little scale toy soldier figures, one of which was packaged with each of the principal characters in blister-packed cards (which you may be able to make out in this packaged group shot):

The remaining Toy Story characters in the showcase are not from the same product line, and thus they’re not exactly to scale (most notably RC and Mr. and Mrs. Potato Head, who should be about twice the size they are). 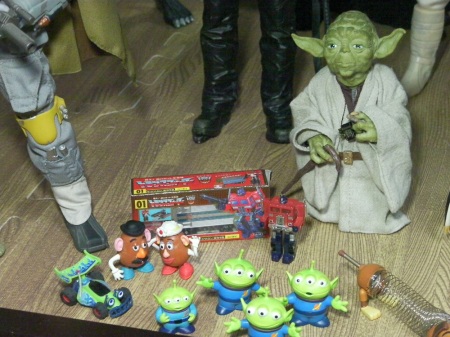 Of note here is the 1:6 scale toy Optimus Prime (that comes complete with authentically-scaled ’80s packaging!), which I included with the Toy Story characters because it’s also a toy representation… of a toy! The Sideshow/Medicom Yoda figure is similarly convincing — seeing as the character was just a rubber puppet to begin with — but I wouldn’t have paid anywhere near the $60 retail value for it. In fact, it only caught my eye when I found it in a Toys ‘R’ Us clearance bin for 500 yen.

Probably the oldest of the figures in this display are the Boba Fett and Stormtroopers from Marmit, Japanese-exclusive Star Wars dolls of unparalleled quality and accuracy, and with price points to match. The Evangelion Rei and Asuka figures are also Japanese, but not nearly as valuable; and that Terminator figure (based on the T-850 from Terminator 3) is American, from McFarlane toys.

Oh, and the six-foot glass showcase was found a few blocks from my house, rotting away in the front yard of an old couple’s house. The back of the case was replaced with a couple of mirrored panels, the legs were removed, and a great deal of time was spent sanding the frame down and repainting it before I brought it into my living room…!

This entry was posted on Sunday, July 6th, 2008 at 7:34 pm and is filed under Action figures. You can follow any responses to this entry through the RSS 2.0 feed. You can leave a response, or trackback from your own site.

4 Responses to He plays with dolls?